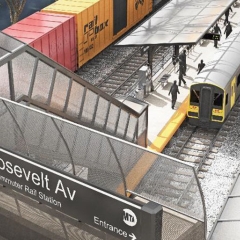 Project Would Serve 80,000 Daily Riders and Connect to Up to 17 Subway Lines and the Long Island Rail Road

Governor Kathy Hochul and Metropolitan Transportation Authority Acting Chair and CEO Janno Lieber today unveiled the results of a yearlong study assessing feasibility of the Interborough Express, the transformative transit project which would connect communities in Brooklyn and Queens to as many as 17 subway lines and the Long Island Rail Road, and significantly reduce travel times within and between the two boroughs.

“Infrastructure is all about connection, and with the Interborough Express we can connect people to their family and friends while also improving their quality of life,” Governor Hochul said. “The Interborough Express will connect Brooklyn and Queens, not only shaving time off commutes but also making it easier to connect to subway lines across the route. With the completion of the feasibility study, we can move forward to the next phase of this project and bring us one step closer to making the Interborough Express a reality for New Yorkers.”

The feasibility study’s results indicate that it is indeed physically feasible to accommodate passenger traffic alongside the existing freight rail traffic, that there is significant demand, and that Bus Rapid Transit, Light Rail, and conventional Heavy Rail are all options in terms of the possible modes of transit.

As announced in Governor Hochul’s 2022 State of the State, the MTA’s next step is to conduct required state and federal environmental review processes, which will also include public engagement to gather input from communities, elected officials, and other key stakeholders to further the process of determining the most appropriate mode of transit.

The Interborough Express would use the existing right-of-way of the Bay Ridge Branch, which is a freight rail line that runs through Brooklyn and Queens, connecting ethnically and socioeconomically diverse neighborhoods such as Bay Ridge, Sunset Park, Borough Park, Kensington, Midwood, Flatbush, Flatlands, New Lots, Brownsville, East New York, Bushwick, Ridgewood, Middle Village, Maspeth, Elmhurst and Jackson Heights. The project would include several new connections in neighborhoods that currently lack efficient connections to each other, and in some cases, to Manhattan.

MTA Chair and CEO Janno Lieber said, “MTA riders deserve a reliable and wide-reaching transit system that promotes equity, and this study proves The Interborough Express will provide better access to jobs, education and economic opportunities for some 80,000 New Yorkers in Queens and Brooklyn. I want to thank Governor Hochul for her leadership on this exciting project and look forward to working with local communities to get work underway.”

The project could provide potential connections to up to 17 subway lines, (2,3,5,7,A,B,C,D,E,F,J,L,M,N,Q,R,Z) serving areas of Brooklyn and Queens while initial studies indicate up to 80,000 daily weekday riders with annual ridership of approximately 2.5 million. Travel times between Brooklyn and Queens could be reduced by up to 30 minutes each way, depending on travel distance.

Proposed service would operate at up to five-minute headways during the peak periods, with off-peak headways of up to 10 minutes at other times of the day. The number and location of stations along the 14-mile corridor will be determined as part of the forthcoming environmental, planning, and engineering studies. Additionally, transportation planners believe the new service would work in concert with the Cross-Harbor Rail Freight Tunnel project, which is why Governor Hochul directed the Port Authority to complete the environmental review for the freight tunnel as she mentioned in her State of the State address. Increasing rail service and reducing truck traffic could have a significant impact on the region.

Determining fares will be the responsibility of the MTA Board at time of implementation; they are expected to be equivalent to standard subway fares.

The Interborough Express could take many different forms depending on factors such as operating mode, service frequency, station locations and relationship with existing freight tracks. The total project cost will be determined as part of the forthcoming environmental review and design process.

Senator Kirsten Gillibrand said, “The Interborough Express would be a game changer for the many Brooklyn and Queens residents who lack sufficient access to public transit. This project has the potential to reduce travel times for up to 80,000 New Yorkers each day while also cutting down on traffic congestion and pollution. The MTA is the engine that moves New York City and I’ll keep fighting to make sure it gets the federal funds it needs to provide reliable, safe, and efficient transportation to every New Yorker.”

Representative Jerry Nadler said, “The Interborough Express is an important project that has the potential to expand transit access to underserved neighborhoods in Brooklyn and Queens. This project can and should co-exist with the Cross Harbor Rail Freight Tunnel project which would finally connect the New York metropolitan region to the national freight rail grid by removing trucks from our streets and diverting them to the underutilized rail network. Together, these projects will improve transportation equity and reduce carbon emissions. I am pleased that these projects will be able to take advantage of new federal funding from the Bipartisan Infrastructure Law, and I want to thank our Governor, Kathy Hochul, who has become a strong supporter for both projects. I look forward to working with her as these projects move forward to improve transit options for all New Yorkers.”

New York City Mayor Eric Adams said, “The Interborough Express is a creative proposal and a critical step towards our shared goal of providing greater connectivity for New Yorkers living in transit deserts as well as much-needed economic development. By building efficiently on existing infrastructure, we can provide commuting options for hundreds of thousands of potential riders from Middle Village and Midwood and from to Brownsville and Bushwick. I applaud Governor Hochul and am excited to work together on this initiative to move Brooklyn and Queens forward.”

Also shame on Mayor Adams, U.S. Senator Gillibrand, and Congressman Nadler, and all of the Brooklyn and Queens elected officials for not including the Bronx,