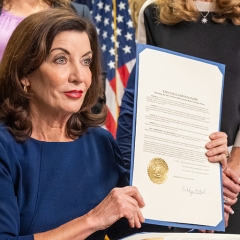 Signs Executive Order to Establish a New Domestic Terrorism Unit within the Office of Counter Terrorism with Focus on Deradicalization and Threat Assessment Management; Establishes State Police Unit Devoted to Tracking and Responding to Extremist Violent Threats on Social Media

In direct response to the white supremacist act of terror at a supermarket on Saturday in Buffalo, Governor Kathy Hochul today unveiled a comprehensive package to combat the steady rise in domestic terrorism and violent extremism, strengthen and close loopholes in state gun laws and crack down on social media platforms that host and amplify content that promotes and broadcasts violent, lawless acts and endangers our communities.

"The horrific and despicable act of terror committed by a white supremacist this past weekend in Buffalo showed that we as a country are facing an intersection of two crises: the mainstreaming of hate speech - including white nationalism, racism and white supremacy - and the easy access to military-style weapons and magazines," Governor Hochul said. "This is a wake-up call and here in New York we are taking strong steps to directly address this deadly threat. Today, I issued Executive Orders to devote substantial resources and focus toward combating the troubling surge in domestic terrorism by identifying radicalized individuals and tracking their threats amplified on social media, and further empower State Police to keep guns away from dangerous people. I am also issuing a referral letter to the Attorney General to investigate social media's role in the Buffalo shooting, and am calling for the passage of several pieces of legislation that will help law enforcement get more guns off the street."

"We will continue to confront this epidemic head-on, stamp out extremists who threaten our communities, strengthen the toughest gun laws in the country and do whatever it takes to keep New Yorkers safe," Governor Hochul added.

"The terror attack in Buffalo has once again revealed the depths and danger of the online forums that spread and promote hate," Attorney General Letitia James said. "The fact that an individual can post detailed plans to commit such an act of hate without consequence and then stream it for the world to see is bone chilling and unfathomable. As we continue to mourn and honor the lives that were stolen, we are taking serious action to investigate these companies for their roles in this attack. Time and time again, we have seen the real-world devastation that is borne of these dangerous and hateful platforms, and we are doing everything in our power to shine a spotlight on this dangerous behavior and take action to ensure it never happens again."

Among these measures, Governor Hochul has issued two Executive Orders. The first Executive Order is designed to fight the troubling surge in domestic terrorism and violent extremism frequently inspired by, planned on and posted about on social media platforms and internet forums. The Executive Order calls on the Division of Homeland Security and Emergency Services to establish a new unit, dedicated solely to the prevention of domestic terrorism, within the Division's Office of Counter Terrorism. This new unit will focus on threat assessment management, disbursing funding to localities to create and operate their own threat assessment management teams and utilizing social media to intervene in the radicalization process. It will also educate law enforcement members, mental health professionals and school officials on the recent uptick in domestic and homegrown violent extremism and radicalization, as well as create best practices for identifying and intervening in the radicalization process.

The Executive Order also calls on New York State Police to establish a dedicated unit within the New York State Intelligence Center (NYSIC) to track domestic violent extremism through social media. The unit will develop investigative leads through social media analysis, with a specific focus on identifying possible threats and individuals motivated by radicalization and violent extremism. Finally, the Executive Order calls on every county to perform an exhaustive review of its current strategies, policies and procedures for confronting threats of domestic terrorism.

The second Executive Order will require State Police to file for an Extreme Risk Protection Order (ERPO) under New York State's Red Flag Law whenever they have probable cause to believe that an individual is a threat to themselves or others.

Governor Hochul also issued a referral to the Office of the Attorney General under Executive Law Section 63(8) to investigate and study the social media platforms that were utilized by the Buffalo shooting suspect to broadcast, promote, and facilitate violence, espouse hate, and legitimize replacement theory. Findings from the investigation will be used to enhance and build on New York State's strategy for combatting hate and violent extremism.

As part of the package, Governor Hochul is also pushing a series of legislative measures designed to help law enforcement investigate and prevent gun-related crimes. The Governor is proposing new legislation to close the "other gun" loophole by revising and widening the definition of a firearm, making more guns subject to various preexisting firearm laws.

Governor Hochul is also working with the Legislature to pass two bills to address and streamline the investigation of gun-related crimes. The first would set forth a process to require semiautomatic pistols manufactured or delivered to licensed dealers in New York to be microstamping-enabled. Microstamping is an innovative ammunition-marking technique that marks bullets and cartridge cases with a unique fingerprint each time a firearm is discharged. This allows investigators to link bullets and casings recovered at crime scenes to a specific gun and potentially other crimes. The second piece of legislation would strengthen gun reporting protocols by requiring all law enforcement agencies to report the recovery of any crime gun within 24 hours of their discovery.

These latest measures are part of Governor Hochul's continued commitment to addressing the gun violence epidemic. The enacted State Budget includes meaningful and significant changes to public safety laws as well as $227 million for bold initiatives that will strengthen the gun violence prevention efforts of law enforcement and community-based organizations.