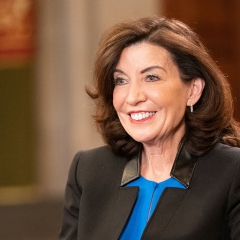 Governor Hochul: "Collective New Year’s resolution – let's beat this together. Get vaxxed, get boosted, wear a mask, get tested, and we will get through this together, New Yorkers."

Thank you, Mayor de Blasio for your partnership and your collaboration from the very beginning to fight this surge. I remember we sat together, it was an evening, we just heard about the very first case of Omicron that appeared in New York State and New York City. And that afternoon we sat together and pledged full cooperation together to let people know that we would be united in our attack on this virus and do everything we can to keep New Yorkers, as well as every New York State resident safe, and to continue that pledge of collaboration.

I'm very pleased that we were able to literally, just a couple of days ago, send over 600,000 rapid tests to your Department of Health last week. And we now have five state-run testing sites that'll be launched tomorrow to help amplify your efforts already, and also hitting people where they go. The MTA is a great place for us to launch testing sites and we'll be opening five more soon, we have two now. So, those are all coming online and continue to ramp up as well as continuing our 37 pop-up sites and 17 more planned. So state and city working together, we're going to make sure that there's no shortage of supply, as well as making sure, in the case we need ambulances, we just sent 10 more ambulances to New York City as well.

But as you mentioned, Mayor, it is so important that we get our kids back to school as soon as this winter break is over. We all have such a strong public interest. We saw the failed experiment, despite the very best efforts of incredibly hardworking, passionate teachers who did their very best with remote teaching and the parents who were just pulling their hair out at kitchen tables, trying to make sure that it worked successfully. Everybody did their part, but we also understand, as you mentioned, schools are safe as a result of our joint mandates, and I have a statewide mask mandate for children in school to make sure they're safe. Our teachers are vaccinated. So we all have to do our part to continue though, to make sure that parents feel comfortable when they send their children back to school on January 3rd.

So from our standpoint, what the State of New York can do to help best is to make sure that there are sufficient testing kits available to be used by the school district. And that is why I directed our Department of Homeland Security and Emergency Services to provide 2 million tests to New York City to allow children to stay in school. And I want to thank our Department of Homeland Security and the Port Authority and DOT and commissioners of all sorts of agencies, General Services, Thruway Canals. They are all being deployed in a statewide effort, but also sending the first 2 million test kits to show that they're available to help New York City schools because of the dense concentration of individuals in the city, the high population, and where we're seeing the rates go right now. So we are working around the clock to offer our best efforts to work with you. The many calls we've had with your departments – I love the collaboration that's going on between our departments of Health. Something that's been missing, but is now in full gear. And all the teacher unions leaders, they've been on calls with us and the parents and everyone.

We're really working closely together to make this happen. I have a call just in a couple of hours with our statewide school superintendents, because they're such critical partners in this effort as well. And I also appreciate what the administration has been doing. The collaboration you've extended to us, but also to the incoming Mayor-elect Eric Adams. That is what the public wants to see. They don't want any battling, no turf battles here, because we have one common battle to fight and that is against this variant.

And I also want to commend the teachers and the school leaders. They know we're all in this together. They've been asked to do so much, such extraordinary work, and we are forever grateful to them for what they've done in the past and what they're going to do now in this shortened time to make sure we can launch the next semester with a safe environment for them and the students. So we're all in this together, I thank them.

But lastly, as you mentioned, Mayor, parents, we could avert all this if every child were vaccinated. We still have time. We literally have hundreds of thousands of kids who have been safely vaccinated already. So you're not the first. You need to join the ranks of parents who have done the right thing for their children to make sure they're protected.

This new variant is affecting children more than the past variants. Before we always said, don't worry so much, it's not really affecting children. That was a different variant. It is affecting children more, but the ones who are getting severely sick are so far only the unvaccinated children. So that should be the message you need to know right now, that children can be exposed to this – contract it, in rare cases get sick, but only those who are unvaccinated. So that's why I so look forward to continuing to work with Mayor de Blasio, yourself, for your leadership.

Also incoming Mayor-elect Eric Adams, we've had many conversations. We'll continue keeping our schools open, continuing our economic recovery for all New Yorkers, as well as our paramount goal of protecting public health. So I want to thank you for inviting me to participate here.

Collective New Year’s resolution – let's beat this together. Get vaxxed, get boosted, wear a mask, get tested, and we will get through this together, New Yorkers.