Street Co-Naming for Miguel A. Melenciano

Council Member Ydanis Rodriguez was joined by neighbors, friends, and family members for a street co-naming ceremony to honor and celebrate the life and legacy of Miguel A. Melenciano. Melenciano was a Journalist and community leader, who dedicated his life to lifting the lives of Dominicans in the Diaspora.

Melenciano was born on July 5, 1964 in the city of Santo Domingo, Dominican Republic, and from an early age, Melenciano displayed a restless, proactive, and friendly attitude towards those with whom he interacted. He enjoyed a childhood full of love and community values, which allowed him to connect well with others and to succesfully navigate any political or social environment.

He graduated with a Doctor of Law degree from the prestigious Universidad Autónoma de Santo Domingo (UASD) in 1984, where he joined movements in defense of students’ rights. Upon graduation, he installed a law office in his hometown and offered legal services to those in need in his community, often free of charge.

In 1999, he immigrated to New York City where he opened the first Central Electoral Board (JCE) overseas office, where he served, among other roles, as inspector and supervisor of Dominican electoral processes conducted in several U.S. states. He excelled as a JCE official during the 2004, 2008, 2010 and 2016 Dominican elections and was later transferred to the headquarters of that body in New Jersey, where he was appointed to supervise all U.S. states, and Canada.

Miguel Melenciano had many interests and a true passion for journalism and communication, managing to write in different relevant media in the Dominican Republic and in New York and later founding and directing the newspaper El Nacional USA. He took his first steps in media communication with the program "Enlace," which he produced and co-led alongside Elías Barreras Corporán and Miguel Cruz Tejada, on a radio station and on channel 35 of Time Warner Cable. Working together, they pioneered one of the first community FM radio stations to broadcast from CULTURARTE on Audubon Avenue in Upper Manhattan.

Due to his charisma and commitment to objectivity, Melenciano achieved a true connection with viewers through his many programs, including the “Carlito de la Vega” show, “Opción New York” and “Registro Semanal.” Melenciano also collaborated with several national media including El Nuevo Diario and was one of the first publishers on the European platform Globedia.

Due to his great sense of humor and “don de gente,” Melenciano was respected and loved by an entire community to which he gave himself entirely and supported unconditionally. On October 28, 2019, Miguel A. Melenciano lost his battle to cancer at the Presbyterian hospital in New York City. His partner Iglis Aquino continues his legacy of love by creating the Miguel A. Melenciano Aquino (M.A.M.A) foundation; an endeavor that Melenciano started during the course of his illness to educate others about cancer and help those patients most in need.

Councilman Ydanis Rodriguez was joined by Congressman Adriano Espaillat to stand with family and friends of Miguel A. Melenciano. 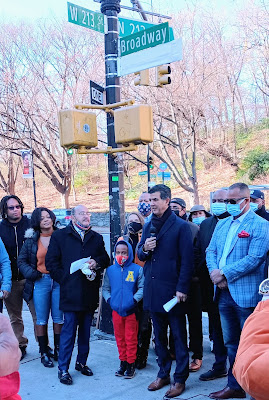 The sign at the corner of Broadway and West 213th Street is covered as Councilman and soon to be New York City Commissioner of Transportation Ydanis Rodriguez speaks about the man for whom the street corner will be co-named.

Congressman Espaillat added some words to the community gathered. 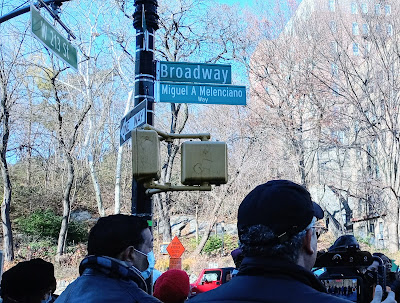 The cover comes off of Miguel A. Melenciano Way at Broadway and West 213th Street.