That's It, I'm No Longer Your Mayor 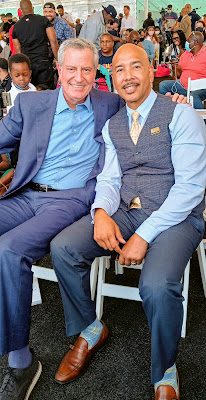 As of 12:30 AM I was no longer your mayor. Hey Ruben you were out of a job at 12:01 AM. Let's smile for this photo by my favorite Bronx Reporter who would not stop giving me such hard questions, I told my moderator not to call on him. Are you really going to work for a developer like he said, but I liked that photo of you picking up trash in the park.

At least he can't pick on me anymore now that I am no longer mayor, and he is going to have to do it now to the new Mayor Eric Adams. At least the Bronx will have a better borough president in Vanessa Gibson, and she can't do any worse than you, because you set the bar so low, but then again you took over for someone who wound up working for a developer. They could have waited in announcing that 17 story building in Pelham Bay until you were out of office. Good luck Amigo.