Tuesday night was the monthly 49th Precinct Council meeting that was held at the Eastchester Gardens Community Center. President Joe Thompson opened the meeting introducing the new commanding officer of the 49th Precinct Captain Gareth Kentish. Captain Kentish gave a brief history of his police career, a former Sergeant in the 49th Precinct, the 47th Precinct, and Captain of the 44th Precinct.

Captain Kentish asked for the community people to communicate information on crimes to the police department. He added that some of the stolen cars are used for robberies or violence, and also the same goes for stolen plates. There were six shootings with all three housing projects having at least one. He closed by saying that the areas where shootings occur are flooded with officers trying to get information on the shootings.

The Cop of the month was Neighborhood Safety  Officer Ortiz who with his partner took a gun off the street. The Citizen of the month was MS. Antwana Powell-Anderson from the Eastchester Garden Houses. Community reports were heard next, and the meeting ended with individual speakers. 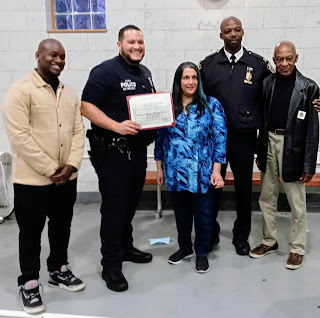 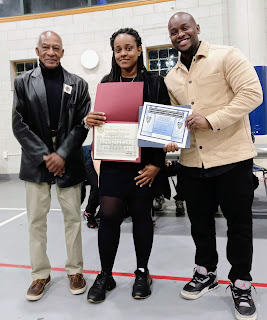 Citizen of the month Antwana Powell-Anderson is flanked by Councilman Riley and Precinct Council President Thompson.