It was billed as a Riverdale Rally for State Senate candidate Miguelina Camilo, being held in Van Cortlandt Park by Bronx Democratic Party Leader State Senator Jamaal Bailey. There was a crowd of over one-hundred people at this Riverdale rally, but you could count the Riverdale residents on less than the fingers on both your hands. The majority of those in attendance were from the Carpenters union, who normally show up at State Senator Bailey's events.

As for elected officials on hand, South Bronx Congressman Ritchie Torres was introduced first. The congressman said he is proud to represent the Riverdale area after redistricting, and he supports candidate Camilo hoping to represent the Riverdale area with her. Then South Bronx State Senator Jose M. Serrano Who was followed by Ben Franklin Reformer and Riverdale Assemblyman Jeffrey Dinowitz. He called Camilo a Progressive that along with Torres and his son the councilman can work with her.

Next was South Bronx Assemblyman Kenny Burgous who said Camilo has the experience, even though she has never held public office. Next Councilman Eric Dinowitz thanked Senator Burgous, yes,  the councilman called Assemblyman Burgous Senator, and then also said it would be a pleasure to work with Camilo. Next was a Riverdale neighbor Farah Ruben who worked for Senator Jeff Klein, and most recently former Councilman Mark Gjonaj. The next elected official was Yudelka Tapia, an assemblywoman from below Fordham Road. who like Camilo is a Dominican woman.

The last elected official to speak was the Bronx Democratic Party Leader State Senator Jamaal Bailey who selected Miguelina Camilo to run for the soon to be vacant State Senate seat. The good senator gave a short speech, and then introduced Candidate Miguelina Camilo who showed off her 'I'm Gonna Win' T-shirt. She then thanked those who came to support her, giving a short speech about her Dominican roots, that she helps one person at a time, and that young people are important. 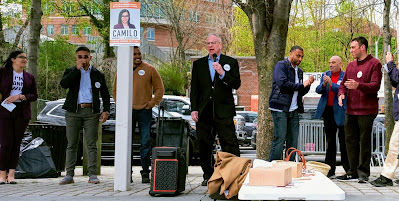 Assemblyman Jeffrey Dinowitz was one of the few people from Riverdale to come out and support Senate candidate Camilo.

Is it South Bronx Senator or Assemblyman Kenny Burgos who came up to Riverdale to support candidate Camilo. 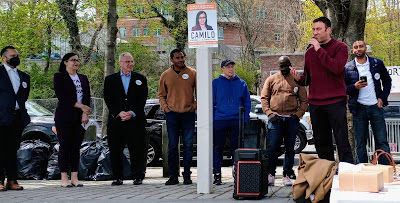 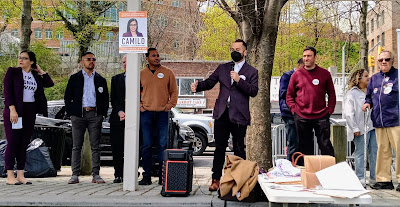 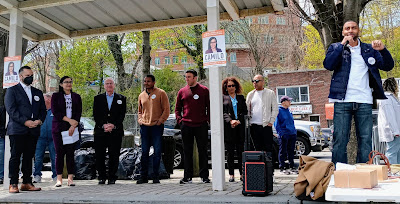 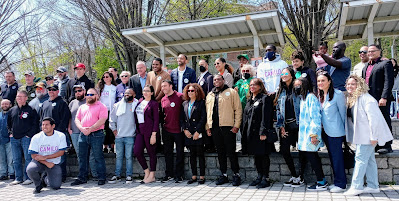 A group photo of those who came out to support candidate Miguelina Camilo, but where are the people from Riverdale or Ben Franklin Democratic Club members who chose her over her two opponents Christian Amato and Lisa Do Hofflich in the Democratic primary. 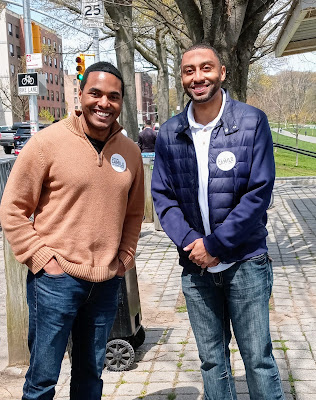 Congressman Ritchie Torres and Bronx Democratic Party Leader State Senator Jamaal Bailey pose for this photo of the duo after the event.
Posted by 100PercentBronx at 10:32 PM