Friday April 22nd An unregistered Dirt Bike was involved in an accident with a car waiting for the light on Williamsbridge Road North, half a block from Pelham Parkway. According to the driver of the car, the Dirt Bike driver was weaving through the stopped traffic waiting for the light to change when it hit his car causing what appeared to be thousands of dollars of damage.

The driver left after speaking with police from the 49th precinct who responded, and the Dirt Bike driver was treated on scene by EMS, and released. The unregistered Dirt Bike was taken into custody by the police department. 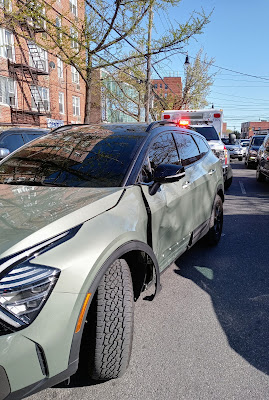 Damage to the car door, wheel well, front quarter panel, and even hood can be seen. 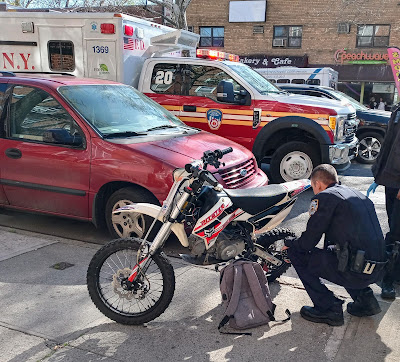 Officers from the 49th Precinct look over the unregistered Dirt Bike, as  the driver is given medical attention in the ambulance.

The unregistered Dirt Bike is being impounded by the NYPD.
Posted by 100PercentBronx at 9:50 PM