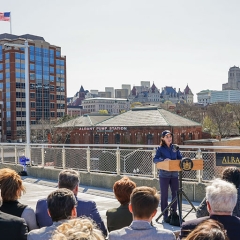 Hochul: "Sometimes we have to fix the mistakes of the past with infrastructure. That's what we're doing in Buffalo, we've done it in Rochester, and Syracuse and in the Bronx. And right here, we have this opportunity, which is extraordinary."

Thank you everyone. First of all, thank you, Commissioner. Thank you for believing in the New York State DOT. Thank you for signing up for another round of tours with us. We're so proud to have you as our leader and our resident visionary, and the leader of an incredible group of hardworking individuals who do not get the recognition they deserve. So I want to thank all the members of the family of DOT. Raise your hands and let me give you some acknowledgement right now. If you're with the team, thank you. All the great workers who are building back our communities all across the state.

Also, it happens with partners who have great ideas, Kathy Sheehan, Mayor of this great city. She just keeps bringing the ideas all the time. And she has my cell phone number, which I don't know, I might have to change it one of these days. But until then, she is great, a great champion for the city, my home away from home. Mayor Kathy Sheehan, let's give her a round of applause.

Yes, as the Commissioner said, we planted a tree on Arbor Day. It's a nice tradition. This is the 150th anniversary of Arbor Day. And to think of the symbolism of that with the fact that we're connecting with this incredible facility, this waterfront to Arbor Hill, a community that has been underserved for far too long, that needs to have this access so you can go to the beautiful, magnificent water and just relax and reconnect with nature and feel good again. We saw during the pandemic how people needed to rejuvenate, recharge their soul during some really dark times. And they can do that by simply now having a stroll and going to the waterfront.

That is a quality of life issue. And when people put forth infrastructure projects and they sound kind of cold on a piece of paper, no, people like the Commissioner and I and others see opportunity to make people in a community like Arbor Hill feel special that this is your path, and it's called the Skyway. I was sitting here thinking when I was much younger, there was a song called Stairway to Heaven. As an aside, it's kind of a really long song and if you're at your school dance with someone you're not thrilled with, it just never seems to end. Bad flashback. Another story team, another day.

This is not the Stairway to Heaven, this is the Skyway to the future. This is the future of how we'll use infrastructure dollars going forward with intentionality of not just fixing roads and bridges and doing basic work, which is so important.

And what's not done, you know it, I know about the potholes. I'm coming after those potholes.

But just to use something like an exit ramp. Someone looked at this and said, why? Why is it like that? Why can't it be better? Why can't we have beautiful plantings, and gardens, and trees and a pathway to the waterfront over the highway? This is what a vision looks and feels like. And the manifestation of the dreams of people who thought so boldly.

And we'll make those investments. Yes, $32.8 billion. She dreams about that. And all the other commissioners across the country are saying, I want to be Commissioner Dominguez in New York because this is extraordinary. So a project like this, the opening of the Albany Skyway made possible is $15 million. $15 million changed the whole landscape for a community.

Sometimes we have to make reconnections where there had been connections and somebody earlier just made a big mistake. Sometimes we have to fix the mistakes of the past with infrastructure. That's what we're doing in Buffalo, we've done it in Rochester, and Syracuse and in the Bronx. And right here, we have this opportunity, which is extraordinary. So that's how we're using the money.

That's how we're going to be known in the future as the ones who created a very different path forward. And that's what I'm so excited about, but also connecting. Talk about connecting to the Hudson, it's not just the Hudson right there. This connects to the Mohawk Hudson bike trail, and I'm a biker and I was kind of surveying the incline here. I think I'd start walking right about there, but I would get over it. And I would then coast down.

Coast into the beautiful scenery, which before was locked up. Unrealized. So the Empire State Trail, recognized as the best trail in America. We're proud of that. 750 miles right here in your home state of New York. Empire Trail, visionary.

So we're going to continue making those kinds of connections, but also something not far from here called the Livingston Avenue Railroad Bridge. Okay. It had a useful life. You know, you built it during the Civil War. That was pretty good. Or a few years removed from the Civil War I think. So, what are you going to do with this bridge?

And it's been such a barrier. I mean, who wants to go take the train when you're going to get delayed right here because it's a single track? And people again came forward and said it doesn't have to be that way any longer. Put the money behind it, Governor, and we can transform it.

And also, not just for the train path, why not make it accessible to pedestrians and bicyclists to go on that very bridge, connecting Rensselaer County and Albany County? And you can ride all the way over to DeFazio's Pizza, right? Mr. DeFazio here? I made a pizza in the back of their kitchen, they said it was one of the best they've ever had. I spent a lot of time making pizzas.

So connections — ride a bike over to get pizza downtown, or, you know, Slidin' Dirty, have a couple sliders have them come over here for Mexican food, I was just there. Drink-to-go, you can sit out there. I don't know if you can get drinks delivered to the waterfront, but that's a heck of a picnic, right? I'm just thinking of great things here right now.

So $400 million to create that connection as well, visionary. We're going to begin construction in late 2023. I'm always going to say, and what happened to 2022? Just so you know, engineers, I'm always pushing even harder. But these two transformative projects are reshaping, not just the landscape, but about how people feel about their community.

That's more powerful than any concrete structures, it's about how you feel. And you live in a great place, but sometimes you just take it for granted and don't realize that there's even more you can be doing. And we did even more with this project, we saw a possibility where there had been none. And that is the hallmark of a community and a state that truly does believe in itself and its people.

So I'm proud to be Governor on this day, to open up this community and make those connections - long forgotten, long unrealized. And they're happening here today and you witnessed this part of history. Welcome to not the stairway to heaven, but the Skyway to the future.