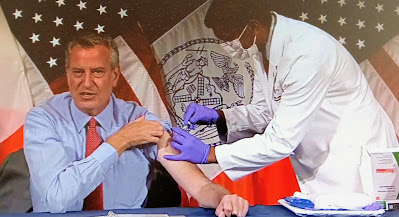 Dr. Chokshi, didn't you give me the Johnson and Johnson vaccine so I would only receive one shot. Why am I getting another shot? Are you injecting me with the Pfizer vaccine this time. I don't want to have a reaction like that reporter in the Bronx had.

Speaking of the Bronx I was there last night for the Bronx Democratic Party Dinner. They had me stand in the same area as Attorney General Letitia James, and Public Advocate Jumanne Williams. What was Bronx Democratic Party Leader State Senator Jamaal Bailey looking for a candidates forum between the three unannounced candidates for governor. I hope Senator Bailey is mad at Kathy Hochul for not picking him as her Lieutenant Governor.