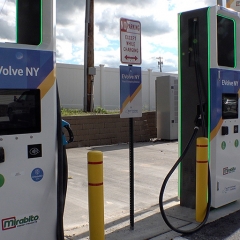 During National Drive Electric Week, Governor Kathy Hochul today announced that New York State's high-speed charging network has expanded in and around the City of Syracuse where fast, affordable, and reliable charging will be offered at two Mirabito convenience stores to encourage more New Yorkers to drive electric vehicles (EVs). The site in southern Syracuse, with four stations, is currently open for use and the northern location, with three stations, is expected to be available in late-October. The latest installations by the New York Power Authority (NYPA) will help New York State meet its ambitious nation-leading clean energy goals, including decarbonizing the transportation-sector and reducing greenhouse gas emissions 85% by 2050.

"Encouraging more widespread use of emission-free transportation and making fast charging more accessible throughout Central New York will significantly reduce greenhouse gas emissions along our State's roadways," Governor Hochul said. "The New York Power Authority's partnership with a well-established regional business, Mirabito, combined with the 'smart city' savvy of Syracuse is a surefire solution to increase awareness about how easy it is to drive clean and help the state achieve its ambitious green energy goals."

NYPA's statewide EVolve NY program is strategically deploying fast chargers at prime locations along travel corridors and in urban areas throughout the state so drivers can travel long distances without having to worry about where to get their next charge.

EVolve NY will have installed nearly 100 chargers across New York by the end of 2021, which will give the state the third largest open access (available to all EVs) 150kW+ fast charging network in the U.S. After this EVolve NY buildout phase is complete, New Yorkers will be able to drive any EV across the state using fast chargers capable of recharging their vehicles in 15-30 minutes located every 50 miles or less.

"These latest high-speed EV charging hubs tie the Central New York region into the growing EVolve NY network and offer convenient fast charging to zero-emission vehicle drivers," said Gil C. Quiniones, NYPA president and CEO. "MirabitoConvenience Stores are a valued partner that has offered up multiple key sites to expand charging opportunities within its network. Mirabito shares NYPA's commitment to move towards a decarbonized future and a healthier environment for all New Yorkers."

The new EVolve NY charging hubs in Syracuse include a total of seven chargers located at Mirabito convenience stores at 415 East Brighton Avenue (serving the south side of Syracuse) and 414 7th N Street (serving the north side). Mirabito, a family-owned and operated energy retailer based in Binghamton which operates more than 100 convenience stores throughout Central New York, will have a total of 19 chargers at five sites, including Castle Creek and Binghamton. An Oneonta site opened in May. NYPA will construct, own and operate the EVolve NY charging network in coordination with Mirabito site hosts.

Mirabito Convenience Stores CEO Joe Mirabito said, "The goal of our partnership with NYPA and EVolve NY is to help provide New Yorkers with the charging station options they need to confidently drive electric vehicles. We support and understand the importance of reducing carbon emissions and appreciate the opportunity to be part of the solution.  Working together on projects like these will be key to moving the mission forward."

With other investments from the New York State Thruway Authority and Electrify America, Syracuse will have added fourteen charging stations at five locations in 2021, increasing access to electric vehicle charging along the major routes into and out of the city, and making cross state EV travel much easier.

New York State's nation-leading climate agenda is the most aggressive climate and clean energy initiative in the nation, calling for an orderly and just transition to clean energy that creates jobs and continues fostering a green economy as New York State recovers from the COVID-19 pandemic. Enshrined into law through the Climate Leadership and Community Protection Act, New York is on a path to achieve its mandated goal of a zero-emission electricity sector by 2040, including 70 percent renewable energy generation by 2030, and to reach carbon neutrality. It builds on New York's unprecedented investments to ramp-up clean energy including over $21 billion in 91 large-scale renewable projects across the state, $6.8 billion to reduce buildings emissions, $1.8 billion to scale up solar, more than $1 billion for clean transportation initiatives, and over $1.2 billion in NY Green Bank commitments. Combined, these investments are supporting more than 150,000 jobs in New York's clean energy sector in 2019, a 2,100 percent growth in the distributed solar sector since 2011 and a commitment to develop 9,000 megawatts of offshore wind by 2035. With the Climate Act as its guide, New York will build on this progress and reduce greenhouse gas emissions by 85 percent from 1990 levels by 2050, while ensuring that at least 35 percent with a goal of 40 percent of the benefits of clean energy investments are directed to disadvantaged communities, and advance progress towards the state's 2025 energy efficiency target of reducing on-site energy consumption by 185 trillion BTUs of end-use energy savings.