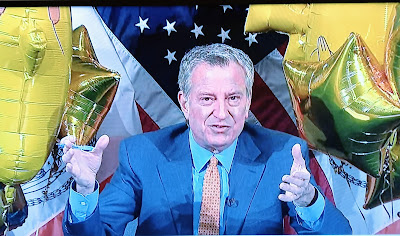 I hope everyone enjoyed the Macy's Thanksgiving Day Parade. We worked hard to bring it to you a close as it was pre-pandemic. We are on the road to Recovery, and we will have Time Square fully open for New Years Eve for when the ball drops, and I am no longer your Mayor.

It's amazing that we have the NYPD taking off the streets a record number of guns, but the number of shootings and shooting victims increase every day, especially in the Bronx. Commissioner Shea, did we do any intense gun warfare in the Bronx like we did in the other four boroughs? Well at least we did not break the fact that the Bronx is last in anything good, and first in anything bad. I'll let Mayor Adams worry about that, like all the other problems the city has, let's party.