Governor Kathy Hochul Comes to Coop-City to Give Out Turkeys

It was a cool November day at the parade ground by Drieser Loop in Coop-City where with the help of the National Guard hundreds of turkeys and bags of fruits and vegetables were set up so residents of Coop-City could have a happy Thanksgiving.

Governor Hochul requested that anyone who has not been vaccinated do so as soon as possible, that people should have already gotten their second dose, and those who received their second dose over six months ago get their third dose which is now available to everyone over eighteen. She said she hopes to come back next year to this event to see that people will not have to wear masks anymore.  Assemblyman Benedetto's speech sounded like an early campaign speech, praising the governor, but two opponents have already announced that they will be running for the 82nd Assembly seat next year. One is from Throggs Neck, and the other is from Coop-City. Councilman Riley spoke last, and his speech was "Let's not waste any time, and get the food to the people". Missing from this event were Assembly Speaker Carl Heastie, and Bronx Borough President Ruben Diaz Jr.

Two hundred turkeys are lined up on tables to be given out to residents of Coop-City. 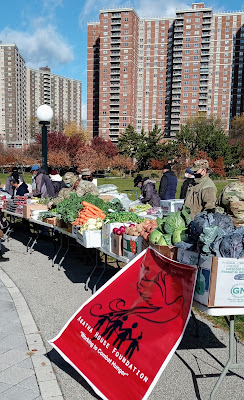 After the turkeys were tables of fresh fruits and vegetables for the residents of Coop-City, with the National Guard ready to help give the produce out.

Governor Kathy Hochul arrives and waves to the people on line. 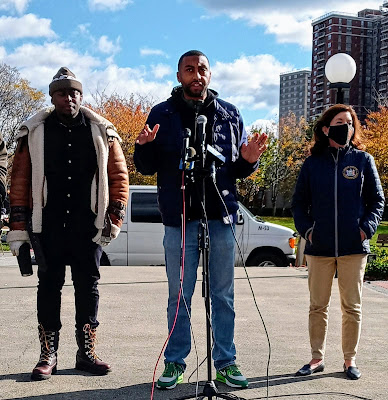 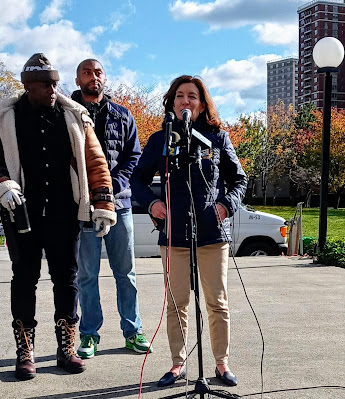 Governor Kathy Hochul spoke for a few minutes about why being vaccinated is so important, food insecurity, and what a great place the Bronx is. 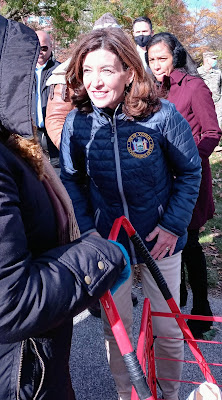 Governor Hochul went to the people to give them a turkey, as several members of her security team looked on carefully. 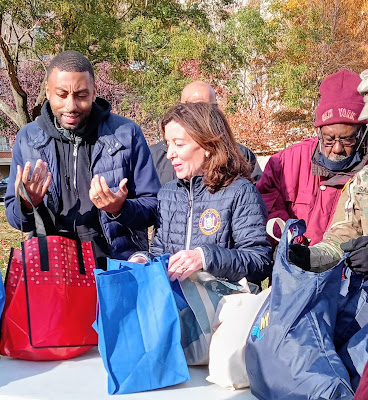 I asked Senator Bailey, who is also the Bronx democratic Party Leader, if there would be an endorsement of Governor Hochul for reelection, and got the usual "I can't say anything to that right now". 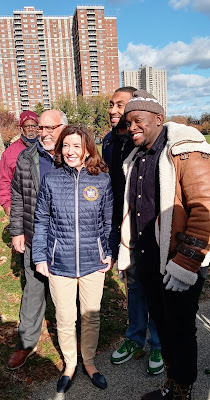