Saturday at the Huntington Free Library in Westchester Square was a panel discussion of elected officials and community leaders to discuss government and community-based solutions to combat food insecurity in the Bronx, followed by a food justice resource fair, turkey, and produce distribution.

The panel discussion consisted of host Johnathan Cetnarski from the Sylvia Center, Senator Biaggi, Council member elect Marjorie Velazquez, Elizabeth Peralta-Foxwell from Feed Forward, Philip Grant from the Hunt's Point Produce Market, Deepti Sharma from Food to Eat, and Jessica Altagracia Woolford from Kingsbridge Unidos. They discussed the lack of fresh fruit and vegetables boroughwide, and the large number of bad fast food stores in place of healthy food stores. Mr. Grant of the Hunt's Point Produce Market said that the market is open to the public, and he would like to see neighborhood organizations buy more fresh food to distribute to the people who live in the areas they serve.

After the panel finished there was a free food, turkey giveaway, and informational tabling for people who were lined down the block waiting to enter the area. Stagg Developers brought two-hundred turkeys to give away, hundreds of bags of assorted groceries and produce were set up to be given away, and there were tables from various city agencies, and community organizations with valuable information. Bronx Borough President Elect Vanessa Gibson was on hand for the free food and turkey giveaway.

Councilwoman elect Marjorie Velazquez gets the last words in for the panel discussion on food insecurity. Next to her is Philip Grant, the head of the Hunt's Point Produce Market.

The line for the free food giveaway stretched down to Westchester Avenue. 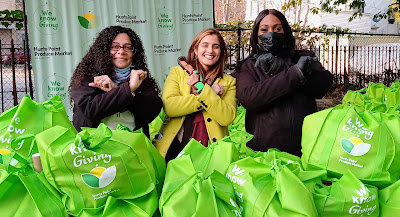 (R - L) Bronx Borough President-Elect Vanessa Gibson, Councilwoman-Elect Marjorie Velazquez, and Ms. Niki Martel stand among the hundreds of bags of groceries and produce that were to be given out, showing the Bronx 'X'.

Extra food that was not put into the bags is lined up to be given out.

More produce sits behind the tables if needed. 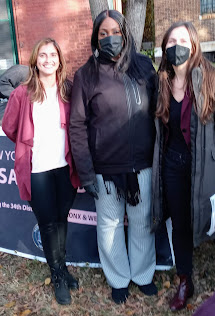 Information tables as people enter the yard for the free food and turkey giveaway. 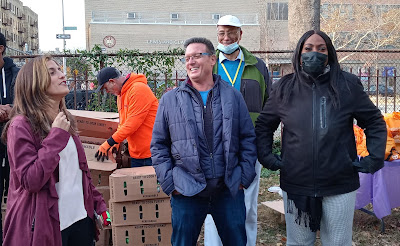 Bronx Borough President-Elect with Developer Mark Stagg and Councilwoman Marjorie Velazquez stand in front of the boxes of turkeys brought by Mark Stagg. 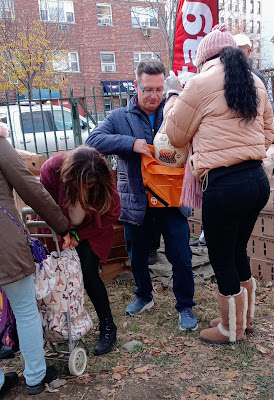 Councilwoman-Elect Marjorie Velazquez has mastered the art of putting the turkey into the shopping cart, as Mark Stagg of Stagg Developers who provided two-hundred turkeys holds the bag for this turkey to be put into.