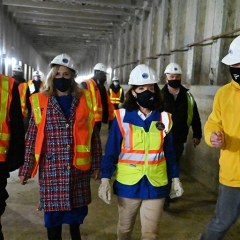 Historic Level of Federal Grant Opportunities for Transit Expansion Made Available in Infrastructure Bill Signed by President Biden
Grant Request Submitted by MTA for Phase 2 of Subway Extension to 125th Street
Extension Will Include Three New Subway Stations, at 106th St, 116th St and 125th St
Governor Kathy Hochul today joined elected officials and leaders from the Metropolitan Transportation Authority to tour the site of the Second Avenue Subway expansion that would extend the Second Avenue line to 125th St in East Harlem. The Infrastructure Investment and Jobs Act signed by President Joe Biden provides $23 billion in new grant opportunities for transit expansion, a historic level of funding that doubles the amount of grants available for major projects like Phase 2 of the Second Avenue Subway. The MTA has submitted a grant request to the U.S. Department of Transportation for Phase 2 of the expansion that will include the construction of three new subway stations, at 106th St, 116th St, and 125th St in East Harlem.
"New Yorkers dream big and act big, and the plan for Phase 2 of the Second Avenue subway expansion unlocks our incredible potential to give communities the transportation infrastructure and equity they will need to compete economically," Governor Hochul said. "I want to thank Senate Majority Leader Schumer, Senator Gillibrand, Congressman Espaillat and our Congressional delegation for their tireless work to secure the resources that can help us deliver for East Harlem a project that was promised decades ago."
Approximately 70 percent of East Harlem residents use public transportation to get to work, much higher than the citywide average of 55 percent. The expansion of Second Avenue Subway would help advance the Biden Administration's and New York State's goal for transportation equity and would improve the local community's access to jobs, health care, and other services, while reducing congestion on Lexington Avenue and improving air quality.  MTA Acting Chair and CEO Janno Lieber said, "Expanding the Second Avenue Subway has been talked about for decades, and thanks to the billions of dollars coming to New York in the infrastructure package, we can finally stop talking and start doing. The MTA is ready to move forward on this project that will greatly benefit East Harlem, an underserved community that heavily relies on mass transit to get to work and school. It will also alleviate congestion on the Lexington Avenue Line, which serves more riders daily than Boston, Chicago and San Francisco's rail systems combined." Phase 1 of the project extended the Q line from 63rd St to 96th St and was New York City's biggest expansion of the subway system in 50 years. Service opened on January 1, 2017, with additional stations at 72nd St and 86th St. Since its completion, the Second Avenue Subway has carried more than 130 million passengers and carried more than 200,000 passengers on a pre-pandemic day. The tunnel segment that will be used for Phase 2 was built in the 1970s from 110th St to 120th St along Second Avenue.